An Indian hospital is building a special facility so that an Egyptian woman, believed to be the world’s heaviest at 500kg (1,102lb), can soon undergo weight reduction surgery. The facility at Mumbai’s Saifee Hospital will have an operating theatre and an intensive care unit. 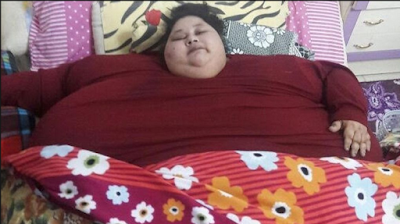 Eman Ahmed Abd El Aty, 36, is expected to arrive in the city on a chartered plane at the end of January. Her family says she has not been able to leave home for 25 years. The estimate of her weight is given by relatives. If confirmed, she would be the world’s heaviest woman alive as the current Guinness record holder is Pauline Potter of the United States who weighed 292kg (643lb) in 2010. Ms Abd El Aty will be treated by a team of doctors led by well-known bariatric surgeon, Dr Muffazal Lakdawala. As the patient cannot use a regular commercial flight, she will be flown to Mumbai on a chartered cargo plane along with her sister who is her main carer, a doctor at the hospital told the BBC’s Geeta Pandey. 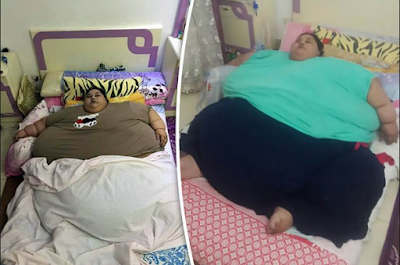 She will first need to bring her weight down before an operation can be performed. Ms Abd El Aty suffers from thyroid and cardiac issues and will need to remain at the hospital for at least six months, the doctor said. Reports say the 278 sq metre (3,000 sq ft) new facility is estimated to cost 20m rupees ($293,762; £239,253) and will be ready by the end of the month.

Woman Who Hid Provision In Her Underwear After Stealing Them Gets Caught. See Photo