A former militant leader, Solomon Ndigbara, also known as Osama bin Laden, has made a momentary appearance from the bush and has declared that he is not a criminal. Ndigbara was declared wanted in 2016, while his houses in Nyeghe, Gokana LGA and Port Harcourt were destroyed. 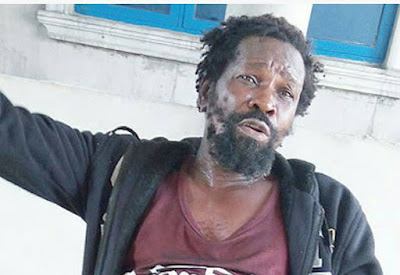 He was accused by security agents of gun running, which he had denied on several occasions while in hiding. The former militant leader also accused politicians and some traditional rulers in Ogoni of fuelling the crisis in the area. Ndigbara, who now wears dreadlock, lamented that politicians had made him homeless, adding that he was ready to give security agents the panacea for peace in the area. Speaking with newsmen in Nyeghe, Ndigbara maintained that he was not a cultist and had forgiven those who were behind his current travails. “Politicians have made me homeless. When I was here (Gokana), there was no cultism. The chiefs, the churches are not helping matters. Because of politics, politicians bought guns for the youths for election. “After politics, they (politicians) cannot take the guns away from the youths. That is why they (youths) are using them for kidnapping. Some traditional rulers are members of cult groups. You cannot stay in Bori, the traditional headquarters of Ogoniland, till 6pm without being kidnapped. “In Ogoniland, we receive strangers and welcome businessmen. But now, even those living in Bori are leaving. How can a policeman stay in Bori for 15 years? Definitely, he will be part of the criminals. “I have not committed any crime to have warranted security agents to destroy my house. I have been in the bush for over one year now. I am not a criminal. “As I finish speaking with you now, I am going back to the bush. I am farming in the bush. If security agents want peace in Ogoniland, I am ready to give them the solution for peace to reign in Ogoni. “I am not a member of any cult group. You can see how I am now; I am suffering in the bush. Ateke Tom and others are not staying in the bush because the politicians in their areas are not like the politicians we have here (Ogoniland),” he said. Explaining that he no longer belongs to any political party, Ndigbara pointed out that he was abandoned by those he worked with in the past. According to him, “Now, I don’t belong to any political party because I cannot go through this suffering and still be in any party. Both the APC and PDP have kept me in my current situation.”

Ndigbara stated that he decided to remain silent in the past because security agents would bring in their armoured tanks to his community if he decided to talk.

Amazing Or Scary! Meet The 9-Year-Old Boy Who Was Born With Cat Eyes… See Photos