A middle aged farmer, simply identified as Elder Samson, arrested a cow and tied it down for allegedly destroying crops on his farm at Sabon- Gari village in Abaji Area Council. A resident of the area, Yahaya Aliyu, said the incident happened on Wednesday morning when the farmer met cows eating some of the yams he had already planted on ridges. 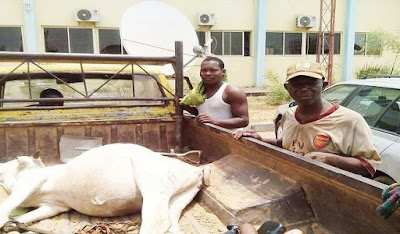 He said the farmer arrived his farm at about 9:00a.m.and saw a herder removing the already planted yams from the ridges and giving them to his cows. “When the herder saw the farmer coming, he escaped and the farmer arrested one of the cows and tied it up, got a pick up van which took the cow to the council secretariat,” he said. It was learnt that a similar incident happened last two weeks, when another farmer arrested two cows and took them to police station for allegedly destroying crops on his farm at Pandagi village of the council. Reacting, the secretary of the council, Alhaji Kamal Adamu Shuaibu, who also confirmed the incident, regretted that despite the council chairman’s efforts at addressing cases involving farmers and herdsmen clashes in the area, some herdsmen were still bent on invading people’s farms at night to destroy crops. “In fact, just barely two weeks ago, the chief of Rumba called me to come and see how cassava was uprooted by some suspected herders. But as the chairman of the committee, we will not relent in our efforts to address the issue,” he said. The Ardo of Fulani in the area, Suleiman Ibrahim, could not be reached for reaction, as his phone was not connecting. When contacted, the Abaji Divisional Police Officer (DPO), CSP David Kolo, confirmed the incident, saying the arrested cow has been brought to the police and was still waiting for the owner to come forward to claim it. “And I have directed my men to go to the farm to see the extent of damage the farmer claimed, before we will know the next step to take,” he said.

Photos From The 2016 PDP National Convention Before It Was Suspended

Photos; Cleaner Nabbed After Stealing $2600 From His Boss. See How He Shared The Loot

Fashion Or Madness?; See What A Lady Wore For An Outing Today. Photos