Lionel Messi was barred for Argentina’s next four games after he used “insulting words” with an official, FIFA ruled on Tuesday. The length of the suspension was a surprise: Many commentators and soccer figures were expecting a one- or two-game ban, at most. 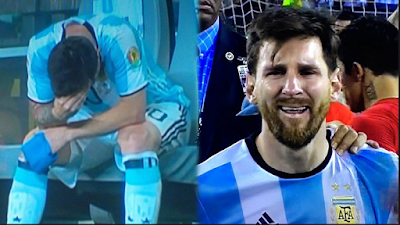 The ban began immediately: Messi did not play in Tuesday’s World Cup qualifier against Bolivia. Without its star striker, Argentina fell, 2-0. He was also fined 10,000 Swiss francs, or about $10,200. The suspension does not apply to games for his club, Barcelona. “The federation will appeal, as it should,” the team secretary Jorge Miadosqui told Agence France-Presse. “We feel powerless, surprised.” The loss to Bolivia was costly for Argentina, which slipped from third to fifth in the South American qualifying standings after Tuesday’s games. Four teams advance automatically from the region, while the fifth faces a playoff against a team from the Oceania region. With four games remaining, Argentina is a point out of fourth place. Messi was called for a foul by the assistant referee Emerson Carvalho in the second half of Thursday’s game in Chile. He strongly disagreed with the ruling and waved his arms and shouted at Carvalho, a Brazilian. He did not get a yellow or red card for his actions at the time. After the game, he shook the hands of two officials, then pointedly did not shake Carvalho’s hand. Argentina won, 1-0, with Messi scoring the lone goal on a penalty.

Messi has been the star of Argentina for years. He has four goals in qualifiers so far, the most on the team.

See What A Young Man Did After Meeting An Old Homeless Woman In Abuja. Photos

Teacher Who Got Impregnated By A 13-Year-Old Pupil Sentenced To Jail. Photos