After weeks of regaining strength on the foreign exchange market, the naira moved in a reverse direction and dropped, albeit by a small margin, to 385 as against 382 on Thursday morning. However, the tale on the international scene is different, as it rose to 308.05 to a dollar, as against 314.75 in the early hours of the day. 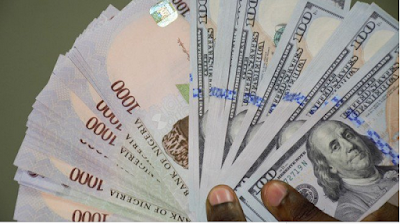 At the parallel market, the naira maintained its rate against the British pound, but exchanged at 410 to the euro as against 400 at the start of trading. At the international market, the naira rose to 385.09 as against 391.04 to a pound and 330.59 as against 338.07 to the euro. The apex bank announced an adjustment to its foreign exchange policy; making foreign exchange available for tuition, medical expenses and basic travel allowance. It earlier directed banks to sell forex at 375 but amended the policy on Monday, and asked banks to sell at 360. “The CBN to sell forex to banks at N357/$1, while banks will sell to their customers at N360/$1 for invisibles (BTA, medicals, fees, etc),” the apex bank said in a statement. “CBN directs banks to post new rates in the banking halls of their branches immediately. CBN examiners to visit banks to ensure the new rates are implemented. “CBN prohibits banks from selling forex funds meant for invisibles to BDCs.” While announcing the decisions reached at the monetary policy meeting, Godwin Emefiele, governor of the CBN, said the parallel market rates would contract further. Emefiele added that the apex bank would be able to sustain its intervention in the foreign exchange market.

Benin Crown Prince Moves To Palace Where He Will Undergo Coronation Rituals…. Photos