A Tunisian top tier chairman has received a life ban from football after pinching the backside of a linesman during a game. Moncef Khemakhem of CS Sfaxien twice pinched the linesman’s buttocks before kissing him on the cheek and biting his left ear. 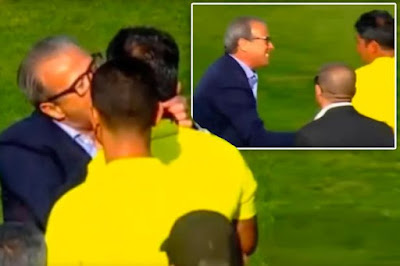 The Tunisian Football Federation suspended Khemakhem “from any activity in football” and accused him of verbally abusing match officials, “dangerous and unsporting behaviour”, “indecent assault” and “harm to good morals”. The incident occurred during CS Sfaxien’s home game against Etoile du Sahel. In a video posted online, Khemakhem storms up to the linesman with a sarcastic thumbs up after a penalty was awarded to Etoile. The chairman also kissed the official’s cheek, bites his left earlobe and then pinches his cheek. 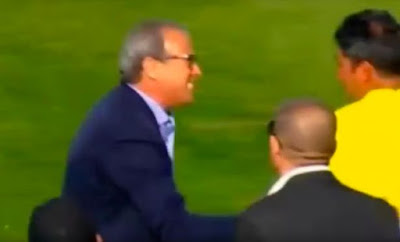 A day after the game, Khemakhem appeared on live TV (Wataniya) and gleefully admitted he had also “twice pinched the backside” of the linesman “to cheer him up because he lost the match”.

Ladies In Leaf Clothing Show Off Their Glamour At The 2016 Calabar Carnival. Photos