A stalker who allegedly asked Barack Obama’s daughter Malia to marry him after turning up at her office has been detained. White House stalker Jair Nilton Cardoso arrived at the company in Manhattan where Malia, 18, is working as an intern last week. 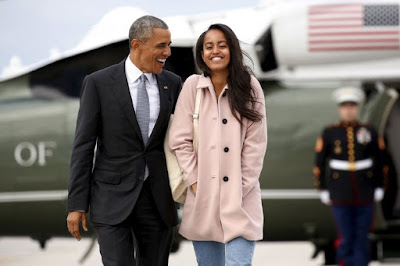 He is then accused of playing loud music and asking the former president’s daughter to marry him. He was escorted out by two of Malia’s armed Secret Service bodyguards. Two days later Cardoso, 30, allegedly followed Malia out of another building where she also interns, sources told the New York Daily News . He was recognised by her bodyguards because he reportedly tried to get into the White House when Malia was a member of the first family. He was interviewed by Secret Service agents after arriving at Malia’s workplace and he was taken away for psychiatric evaluation. Officials are also considering whether to bring harassment charges against him.

Malia has been enjoying life since leaving the White House.

Paul Pogba Hangs Out With Drake In New York Ahead Of His Manchester United Move. Photos

2 'One Chance' Operatives Apprehended By Task Force In Lagos. Photos