A knifeman stabbed two people to death and injured 18 in a terrifying rampage in China. The 30-year-old suspect, who is believed to be suffering from a mental illness, was arrested following the attack on Sunday, Xinhua news agency reported. 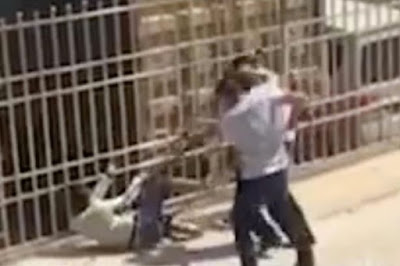 Violent crime is rare in China compared with many other countries, but there has been a series of knife and axe attacks in recent years, many targeting children. Twenty people were taken to hospital after the knife attack in Guizhou province in the southwest. Two later died in hospital, Xinhua said. It did not give any details of the victims.

The suspect’s father told the news agency his son had a history of mental illness.

Governor Fayose In A Sad Mood As He Visits Victims Of Fatal Accident In Ekiti State. Photos

Is This The World's Unluckiest Bride? See What Happened To This Lady On Her Wedding Day

Recession Or Culture? See What This Couple Used As Cake At Their Wedding. Photos