John Onaiyekan, a cardinal and Catholic archbishop of Abuja, says those who incite church members from their pulpits should be arrested. Onaiyekan said this while speaking at a workshop on ‘Preventing Violent Extremism in Nigeria’, organised by Club De Madrid in collaboration with the office of the national security adviser (ONSA) on Tuesday. 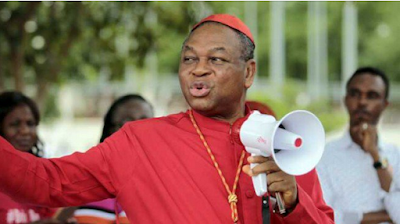 The cardinal said religious leaders were not untouchable in the face of the law. “There is enough in the law in Nigeria to curb reckless speaking, if somebody stands up on his pulpit in church and start inciting his members to go and kill others, he has committed a crime under the Nigerian Law, he should be arrested, which is not happening,” Onaiyekan said. “They would say if you touch religious leaders there would be backlash. Let the backlash come for goodness sake, so that we can get out of all this mess.” On his part, Yem Musa, coordinator of the counter-terrorism centre (CTC), ONSA, said by naming the insurgents Boko Haram, Nigerians refused to give legitimacy to the group. He said due to experience in violent terrorism they were improving on the way the CTC works. “The threat that Nigeria faces from violent extremism today is by a group which has proven its capacity to evolve, adapt and extend its network both within Nigeria and abroad,” Musa said. “We should note is derogatory and that is why in several online messages, the group tried hard to distance itself from a name, it has come to hate. In naming the group Boko Haram, Nigerians refused to offer the group legitimacy. “As a result of our experience with violent extremism, we are changing how we work. New institutions are being created, new expertise being developed. “We have revised our National Security Strategy and developed a National Counter Terrorism Strategy (NACTEST) which has set out our short and long term strategic goals in the fight against terrorism as well as defined the roles and responsibilities of our Ministries, Departments and Agencies.

“The Counter Terrorism Centre is charged with the responsibility of coordinating activities under the NACTEST.”

Man Flogs Shameless Couple Who Were Having Sex By The Side Of A Busy Road. Video

Check Out Super Eagles' Latest FIFA Ranking In The World And Africa.