A randy couple have been pictured ‘having sex’ outside a busy block of flats in broad daylight. Neighbours looked on in shock as the lovers seemingly had intercourse in full view of anyone who cared to watch. 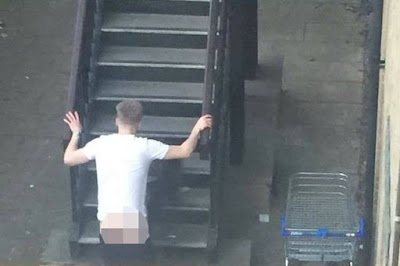 A young man and woman, described as being around 20 by a witness, were seen engaged in a 15-minute romp by a set of stairs at 8pm on Saturday. The couple “didn’t seem to care if anyone saw”, according to witness Kay Hamersley, despite the festivities for music event ‘Ware is the Music’ going on in the area at the same time. Miss Hamersley was having a cigarette by a window in her friend’s flat when she saw the young couple walk into the square and snapped what happened next on her camera phone, the Herfordshire Mercury reports.

The dental nurse, 20, said: “First they were just standing there looking at each other, which I thought was quite odd so I called my friend over. “The young man then pushed the girl to the wall and started to pull her trousers and underwear down. 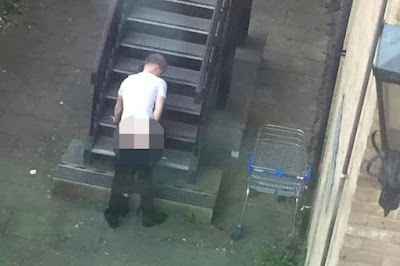 “After a few minutes they stopped and then went to walk away. As they were walking away, they then decided to do the same thing again but on a different wall. “The young man then pulled the girl over to the stairs. He then did the same and they started to have sexual intercourse.

“I couldn’t hear anything from where I was, but they didn’t seem to care if anyone saw what they were doing.” Miss Hamersley said there were many people nearby for the event, including young children.

She added the pair had behaved disrespectfully to themselves and others.

Man Whose P*nis Got Stuck In A Ring Spanner Gets Help From Firefighters.