The driver of a bus that collided with a lorry at Malili on the Nairobi-Mombasa highway in Kenya, killing eight people, was avoiding running over a snake, one of the accident victims has revealed. Ms Elizabeth Mwongeli, 28, told the Nation at Machakos Level 5 Hospital, where she was admitted, that just before the crash she heard the driver shout that he had seen a big snake. 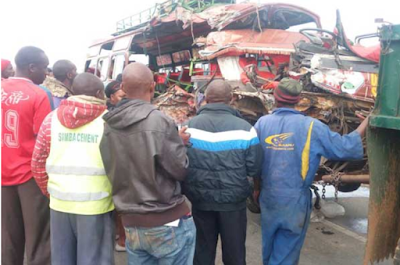 “The driver was avoiding a snake,” Ms Mwongeli, who appeared traumatized and in pain, said. “I heard him shout before he swerved and hit a lorry. I don’t know if the snake was hit.” Speaking in the casualty ward as she waited for a plaster of Paris to be fitted on her leg, Ms Mwongeli, who was injured on the head and right knee, said she had gone barely two kilometres from her Salama home taking a sick child to Machakos Hospital. Ms Mwongeli recalled seeing bodies on the road. “I counted five bodies of those who had died on the spot,” Ms Mwongeli said. The child was also admitted at the hospital. Seven victims were admitted in the casualty ward and a child was at the intensive care unit.

See What A Mother Did To Stop Her Daughter From Sucking Her Fingers. Graphic Photos

Mob Descend On Man After Being Accused Of Filming Up A Lady's Skirt In Public. Photos