The Police in Benue State have launched a manhunt for an ex-convict for allegedly killing a vigilante and inflicting injury on another at Nyiman layout of Makurdi metropolis. 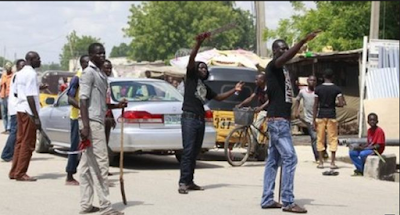 Spokesman of the Command, Moses Joel Yamu, told newsmen on Tuesday that the ex-convict whose name was simply given as Solomon suddenly started shooting sporadically in the area on Saturday and in the process killed the male vigilante member. According to the police PRO, the attacker proceeded to Agber suburb in Makurdi and carried out a similar mission, which resulted in one person injured from gun wound but now recuperating in the hospital. He said the suspect had absconded but the police were trailing him as well as investigating the matter to ascertain among other things the court which convicted him and for what offence he was earlier jailed.

However, sources said that the ex-convict allegedly attacked those he suspected to have exposed his activities which landed him in prison.

Police IG And His Team Storm Ondo State Ahead Of Governorship Election. Photos

Nigerian Man Cherishes Moment After Taking Selfies With US Marines And Navy. Photos