The Economic and Financial Crimes Commission EFCC, on Monday November 28, 2016, docked one Okwara Victory before Justice I.B Gafai of the Federal High Court Awka in Anambara State, for charges bothering on obtaining by false pretense to the tune of $8,674USD. 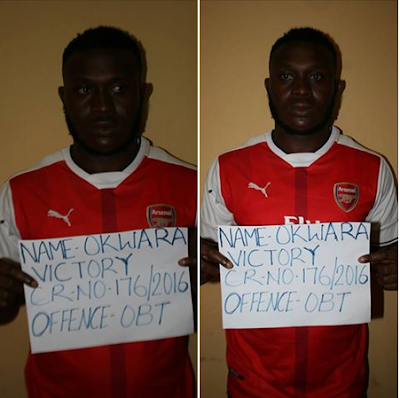 When the charge was read to the accused, he pleaded not guilty on all counts of the three count charge preferred against him by the EFCC. In view of his plea, the Defense Counsel Barr. Emma Onyibor applied for the bail of his client adding that his client had been on administrative bail granted him by the EFCC, and had not defaulted but reported regularly to the EFCC whenever he was needed. But the Prosecuting Counsel Barr. Habila Jonathan informed the court that he was served the motion for bail, shortly before court proceeding and needed time to study and respond. The court upheld the argument of the EFCC counsel as the Judge was yet to study the bail application which the defense also served the court shortly before proceedings. The court then ordered that the accused be remanded in prison custody, while the case was adjourned to December 6, 2016, for hearing and consideration of bail.

One of the charge against the accused person reads: That you Okwara Victory sometime in the month of April 2016 at Onitsha within Awka Jurisdiction of the Federal High Court of Nigeria, with intent to defraud did obtained the sum of N1,332,420 (one million three hundred and thirty two thousand four and twenty naira) being the naira equivalent of $4,190 (Four Thousand One Hundred and Ninety US Dollars) from one Ekweaba Oyemechi when you falsely represented yourself to him that your girlfriend who lives in America will send you $4,190 (Four Thousand One Hundred Ninety US Dollars ) meant for your return ticket to America, a pretence you knew to be false and thereby committed an offence contrary to section1(1)(a) of the Advanced Fee Fraud and Other Fraud Related Offences Act of 2006 and punishable under Section 1(3) of the same Act.

“I Gave Him All My Heart And All He Did To Me Is This” – Heartbroken Lady Laments. PICS

Photos Of Dignitaries At President Buhari's Residence As His Daughter Weds. Photos