Ikwerre Local Government Area of Rivers State has again been hit with cult attack with at least three people feared killed and several others with bullet wounds. A source within Ubima community who confirmed the incident to Daily Post said suspected cultists invaded the community within the hours of 8:30pm and shot at their targets. 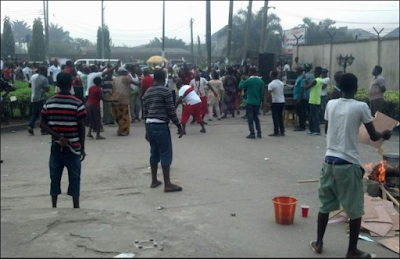 The source said the suspected cultists stormed a viewing centre and opened fire, killing three and left several others with bullet wounds. He also disclosed that the fate of those who were hit with bullets were still not certain as information coming from the hospitals were worrisome. The Rivers State Police Command has confirmed the incident. He, however, said only one person was killed in the shooting.

In the meantime, the Nigerian Army has confirmed the deployment of troops of the Twenty-Nine Battalion and the Anti Robbery Team of Six Division at Sime community in Tai Local Government Area of Rivers State.

I Accepted My Wife After She Left Home For 7 Years, Man Says As Court Dissolves Marriage…

President Buhari Poses With Niger Delta Leaders After Meeting At The Villa. Photos