A teenage boy declared his love for his school teacher and was obviously was rejected by the stunned teacher in cringe worthy scenes. The boy, who is believed to be around 17 or 18 years old, even had some of his friends help him out, but the public stunt did not go as planned. 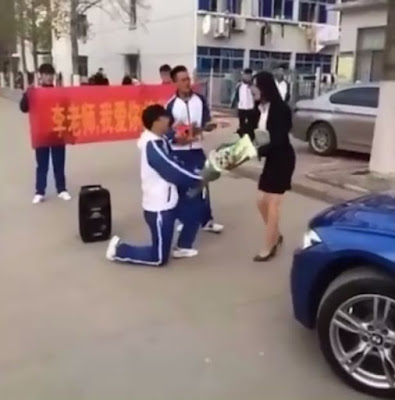 He had a bright red banner declaring: “Miss Li, I love you! Marry me” which was unveiled as the teacher, named Miss Li arrived on campus as the Chinese secondary school. As more and more pupils came out to watch, the boy stood holding a bouquet of flowers. Next to him stood one of his friends who was playing what looked like a small guitar or a ukulele, with his voice belting out from an amplifier on the ground nearby. In the now viral video of the incident, the teacher can be heard saying: “Stop, stop fooling around. Please get up,” while she tries to stand him stand back up. But the boy continues to hold the bouquet and refuses to give up. 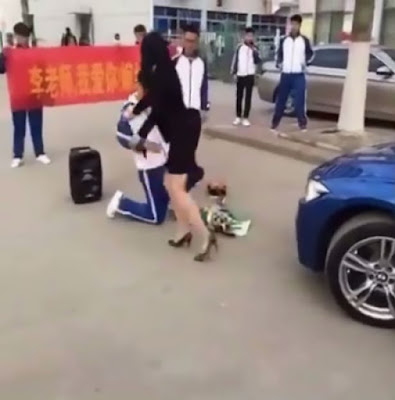 Two Corpses Discovered In A Ditch Opposite A Hotel In Delta State. Photos