Prison experience has earned a 21-year-old armed robbery suspect the leadership of a five-man gang in Lagos. Dennis Soji, alias Segun Igbekele allegedly confessed to the police that he became his gang’s leader because he is an ex-convict. 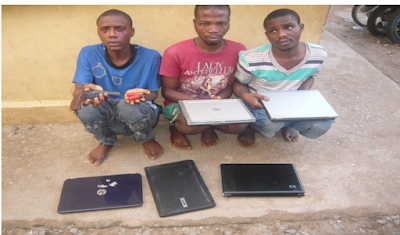 “But I do not operate guns”, he said. His gang terrorised Lakawe in Ajah before it was smashed by the Special Anti-Robbery Squad (SARS). He was arrested with two members of his gang, Babatunde Haruna, 23, and Ahmed Yusuf, 22, while robbing two houses in Thomas Estate, Ajah. But, two other members of the gang identified simply as Tunde and Alumbo escaped. The police recovered five laptops and a locally made double barrel gun cut to size from the gang. He said: “Yes, I was arrested by Zone II Operatives of the SARS in October 2016 for stealing. I and my second Omoniyi Ayetoba, and we were charged to court and sent to Kirikiri Prison in Lagos where we served for two months. I must tell you the truth. Our prison system is not reforming convicts because of what the inmates pass through while serving their prison terms. I came back from prison this year and life was not easy for me. “When I came back from prison, I had no money to buy the instruments I used to use in doing my Disc Jockey (DJ) work. I am a DJ and that was my work before I went to prison. I was looking for at least, N100,000 to buy instruments for my DJ work but I could not get a dime. “I was so desperate to get the money to buy DJ instruments that I started following my friends Ahmed and Babatunde who were good in armed robbery work. When the idea to join them to rob came up I decided to follow them to see if I could get money to buy the instruments. “Two months ago, that is, the month of March, at about 8.30pm I, Ahmed, Babatunde and two others went to Thomas Estate to rob. We entered a compound that has two buildings at about 1:30am and finished the operation around 2am. “We used only one gun and one live cartridge. We did not fire anybody. We robbed only those on the ground floor of both buildings. We used the gun to intimidate residents for them to comply or cooperate with us. “I have participated in two operations. The first operation we robbed one resident identified as Gani Ibrahim. We did not shoot him. We did not beat him. We only collected his phones and laptop. He was not the only person we robbed that day. There were other victims and we collected about 10 phones and five laptops. We have not even sold the laptops because buyers have not indicated interest. We were not able to get cash because the residents said they had no money at the time of the operation. We only sold phones but the second operation was not successful because we, three of us were arrested and Tunde and Alumbo escaped. Babatunde said: “I started handling guns by accident. It was our gang member Tunde, who is still at large, that was handling guns for our gang. How he handed it over to me was a surprise and I had no choice than to hold the gun. I am the one that points guns at victims to make them to cooperate. I have never shot any victim. I only point gun at victims and shout at them just for them to cooperate. “I am from Abeokuta in Ogun State. I am a trained auto mechanic at Abeokuta but when I could not get work I came down to Lagos to do bus conductor work. My route is Obalende to Ajah. At times I sleep inside our commercial bus or garage. I used to go to clubs and that was where I met DJ Soji. We became friends and drink together after the day’s work. “When Soji told me about the work, I followed them to go and rob; initially he did not explain the nature of work when he called me to come. It was when I got to him that he told me that it was robbery work. I accepted. I never told them that I would be the one to carry gun. It was Tunde that escaped that is the person that handles gun for our gang during operations but this last operation he trickily handed the gun to me to handle. We did not succeed because three of us were arrested at the scene”. Yusuf said: “I am from Ibadan in Oyo State. I am a generator repairer at Festac, Lagos. If I service one small generator they give me N400. I can do four to five generators every day which can fetch me N2,000 to N2,500 daily. “I have many friends. I knew Soji from one of my friend’s barber’s shop when I went there to repair a generator. We became close friends. One day he brought this idea to follow them to go and rob in Thomas Estate. He told me and Babatunde to follow him to go and rob. We accepted and followed him to Thomas Estate to rob. We were five in number but two escaped. The two escaped are Tunde and Alumbo.” On who their gang leader is, he said: “I cannot say this is our gang leader because this type of work (robbery) is where one can show his talent. When we are in operation anybody can become the leader. The important thing is who knows the scene very well to coordinate that day. I could not escape that fateful day because I did not know the typography of the area very well. It was my first time of following them to go and rob in that area. If I am released I will not follow Soji again to do anything because of what I experienced from following him.

Wow! You Will Never Believe The Amazing Gift This Man Gave To His Mom On Mother's Day..Photos