The police in Imo State have reportedly apprehended the mastermind of a bank robbery which led to the killing of a bank customer in the state. Some gunmen had trailed the bank customer to a Zenith bank branch on Wetheral Road, Owerri. They reportedly carted away the money which the victim wanted to deposit in the bank and shot him dead. The assailants reportedly injured three policemen attached to the bank, shooting indiscriminately as they fled the area. . 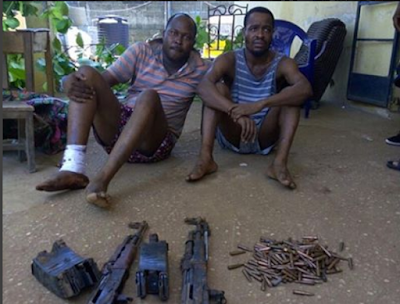 However, one of the gunmen was shot dead. After six weeks of investigation, two suspects– Justice Ogbenna, aka JJ, and Okechukwu Onwuamaegbu– were on Friday arrested in Aba, Abia State by operatives of the Imo State Police Command. . They were arrested at the Saint Francis Mortuary in Osisioma Aba, Abia State. The leader of the gang, Ogbenna, was arrested on the day he planned to bury his late father. . A police source said, “We got information that he would bury his father on Friday and we trailed him to the mortuary. We laid siege to the morgue. Immediately he arrived with his family members and friends to carry the remains of his father home, we arrested him.” .

The police source, who described the suspect as a notorious armed robber, claimed that he had jumped bail in Anambra State in 2016 in a similar case of armed robbery.

How Palm Wine Laced With Drugs Killed 3 At A Party In Ondo State.