Police in Delta State have arrested an Assistant Superintendent of Police (ASP) and a lady believed to be his lover for allegedly trafficking Indian hemp on Benin-Asaba-Onitsha Expressway. The ASP (names withheld), was arrested on the expressway in his Toyota Camry car. 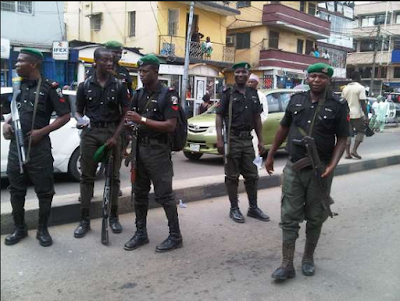 The car was loaded with the suspected substance. It was gathered that the ASP was shot while attempting to evade arrest on Friday. It was learnt that the suspect, who was behind the wheel, was with his female friend. She is believed to be the owner of the contraband. The ASP and his lover alleged to have attempted to speed away after they got to the popular Mariam Babangida Way Junction and sighted policemen on ‘Stop-and-Search’ duty. The attempt of the lovers to escape failed as the police opened fire on their fleeing car and finally caught up with them. They were arrested after the NNPC Mega Station. The fleeing car somersaulted twice after the police pumped bullets into the tyres. Policemen frisked the occupants and the car and discovered the identity card of the male occupant as a senior police officer. The lovers didn’t die, but the ASP sustained severe injuries.

He was rushed to the Federal Medical Centre (FMC), Asaba. A police source at the Okpanam Divisional Police Headquarters, said: “We’re yet to get medical update on the suspect.” The police source, which said the Indian hemp was wrapped in smoking sizes and arranged in batches, estimated the whole quantity to be about 5,000 rolls.

Michael Essien Banned From Playing Football In Indonesia. See Why

See How Bouncers Descended On Two Drunk Men During An Attack In A Strip Club. Photos

Furious Wives Attack And Beat Up Mistress Over Alleged Relationship With Their Husbands. Photos