A suspected robber, Lawrence Nwede, has accused operatives of the Special Anti-Robbery Squad, Lagos State Police Command, of releasing a member of his gang, who allegedly procured a gun they used for operations. Nwede said the gang member, whom he identified only as Uche, was released by SARS a day after he (Uche) was arrested and brought to the command. 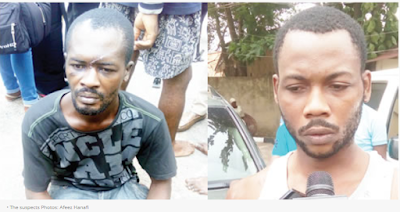 Although the 27-year-old indigene of Ebonyi State, who was paraded on Tuesday at the command’s headquarters in Ikeja, confessed to being a member of the Black Axe Confraternity, he insisted that he had never been involved in any robbery. He told our correspondent that he, Uche and other members of the cult contributed to buy the gun for N50,000, saying the arm was usually in his (Nwede) custody. PUNCH Metro learnt that the suspect was nabbed by policemen on April 4 on Church Street, Okokomaiko, and the gun was found on him. He was said to have been subsequently transferred to the command, where he mentioned Uche as his accomplice. In a chat with PUNCH Metro, Nwede stated that his wife fled home with their son after she discovered the gun where it was kept in their apartment. He said he feared that his wife could disclose the discovery and decided to return the arm to his gang members. He said, “I am a member of the Black Axe. I was arrested on my way to hand over the gun to Uche and other members in the Alaba International Market. I had called them on the telephone to come and collect it, but they refused. I told the policemen that I would have taken it to the station, but I would be detained. “Uche and I are both gang members. I gave his details and those of other members to the police and he was arrested. He passed a night in SARS cell, but was released the following day. He is a big man and has a lot of money. He imports wires and some other products. He has a shop in the Alaba International Market. “I have nothing to hide; I have never robbed or take anything from anybody before. We raised N50,000; Uche and some other members bought the gun, while I kept it. Anytime a member wanted to use it, I made it available. I used it to defend myself whenever hoodlums came to disturb me in my shop in Alaba.” However, a mild drama played out when a SARS operative, who was with the suspect during the interview, refuted Nwede’s claim that Uche was culpable. “He was only trying to drag people into the matter. We brought the man (Uche) he mentioned before him. The man asked whether he (Nwede) knew him, but he denied,” the policeman said. But Nwede swiftly reacted to the operative’s statement, saying he stood his ground that Uche was a member when they were brought together. The command’s Public Relations Officer, Olarinde Famous-Cole, said Nwede was entitled to his opinion, adding that Uche would not have been released if he was found wanting. He said, “Investigation is still ongoing. The suspect can say anything at the point of interview. What he said is not true. Who is he (Uche) that the police would allow him to go if he is culpable? The command will never do that.” Also paraded was one 24-year-old Ebele Odikwe, who allegedly specialised in robbing traders at the Alaba International Market along with other members of his gang. “My boys and I used to enter shops in the market. Traders gave us money out of fear. Sometimes, we realised N50,000 per day. We are eight in number. Some of them are already in prison. I have a wife with a kid,” he added. Earlier, while briefing journalists, the Commissioner of Police, Fatai Owoseni, said 68 suspects were arrested in connection with the gang war at Idi Oro, Mushin, on Monday, while nine of them were released after investigations. “Thirteen armed robbers were arrested across the state. During encounters with the police, two lost their lives. Eight different arms and 18 rounds of ammunition were recovered, while 10 vehicles of different brands were also recovered,” he added. The command also presented certificates of commendation and undisclosed sums to families of four policemen – Inspector Godwin Iruagbalaji, Inspector Pemi Francis, Sergeant Mamuda Dembo and Sergeant Ido Ekoro – who lost their lives during a militant attack in Ishawo, Ikorodu, on April 9. Operatives, including the Divisional Police Officer, Owutu Police Division, CSP Ejiofor Obiora, who responded to a distress call from residents of the area on the day, were also given the certificates and cash gifts. Ekoro’s sister, Mary Okereke, described his death as devastating. He said his wife just gave birth to a set of twins.

A policeman, Alexander Ugadu, could not speak with PUNCH Metro due to injuries he sustained in the head and mouth, while other members of the team said they were not allowed to speak with the press.

Iara Oshiomhole Receives Surprise Cakes From Her Staff On Her Birthday. Photos