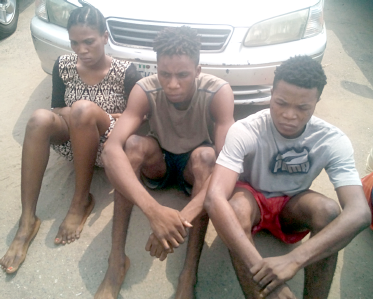 According to the woman, who claimed to be the brain behind the kidnap, “I called Idris to come to my house after I was told that he was coming to Mowe in Ogun State.

“I mooted the idea of kidnapping him because I know how rich his parents are. I told my husband about how we would kidnap him and tie him with a rope. I told him that when he comes to the house, I will do anything he wants. “I planned the kidnap with my husband and his friend Sodiq and we demanded N100,000 from his parents before we released him.” On his part, Paul said: “I planned it with my wife. I met her in a club, where I dance and we started dating. The person we kidnapped told my wife that he was coming to the house, thinking she was still single and that was what prompted the kidnap. “We did not harm him or use any ammunition; it was a docile operation. The boy is gentle and cooperated with us. “My wife told me that the boy is from a very wealthy home and that his father is a multi-millionaire, but we only requested for N100,000 and we were paid three days later. “This is the first time we planned kidnapping. We are not kidnappers and we have not done this before.” Speaking, the third suspect, Ayoola Sodiq, said: “Paul is my friend. I met him at a club in Mowe Ibafo, where he dances. He introduced me to this business and told me how he was planning to kidnap the victim.  “His wife called the boy and when he came to the house, they pounced on him and told him to sit on the floor. They then called his parents and informed them of the kidnap, demanding that they pay N100,000 to her husband’s account. “I was given N30,000, while Paul took N40,000 and gave N30,000 to his wife.  Police tracked and arrested me after they had arrested Paul and his pregnant wife.”

ISIS Militants Cut Off Hand Of Man Accused Of Stealing In Public. Photos