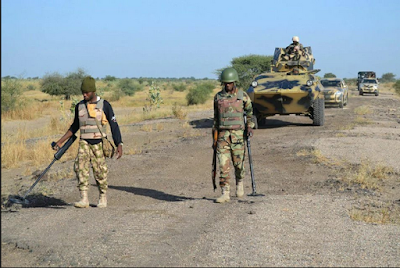 The troops, who are of the 122 Task Force Battalion, Pulka, in Borno State, ran into the land mine between Banki junction and Bama as they conducted escort patrol from Pulka to Maiduguri.

According to Premium Times;

The incident occurred at 9:10 a.m. Saturday, our sources said. Five members of the detachment were badly injured, and were promptly evacuated to Bama for first aid by a patrol team from Bama.

“The distance between Bama and Banki junction is just 7km,” a military analyst told Premium Times . “There are troops deployed in-between yet Boko Haram terrorists still sneak in and plant mines. “They sneak in at night and plant the mines. They know troops would always move in the morning.”

He Can't Stop Smiling; Caption This Photo Of Bauchi State Governor In His Office

Governor Wike And Wife Publicly Showcase Their Love At The 2016 AMAA Awards. Photos