Troops deployed to southern Kaduna have arrested two persons in possession of ‎live ammunition in Kagoma area of the state. The General Officer Commanding One Mechanised Division of the Nigerian Army, Major General Adeniyi Oyebade, disclosed the arrest to reporters in the state in northwest Nigeria. 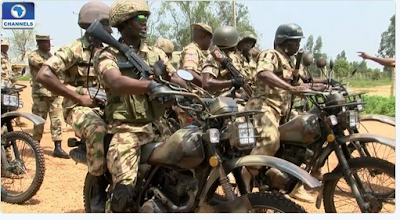 General Oyebade has also ordered the immediate deployment of troops to Ninte, a community that has been ravaged with renewed attacks in Jema’a Local Government Area. The ammunition was discovered when two middle-aged men, who were driving a maroon coloured Volkswagen vehicle through a road in the front of the Chief of Kagoma’s Palace were flagged down but declined. This led to their suspicion and interrogations by soldiers on watch. Luck, however, ran out on them, as the GOC and the troops were coming out of the palace after peace talks with the elders to address the killings. The suspects were apprehended and whisked away to the military camp in Kafanchan for further questioning. While assuring residents of the area that troops were on ground to restore peace to without taking side, General Oyebade appealed to both the Fulani communities and locals not to cause a religious crisis. He particularly warned the youths not to allow anyone, especially politicians use them to achieve their agenda by causing crisis at the detriment of their future.

Meanwhile, normalcy has returned to Kafanchan and Goska, the villages that lost at least 10 lives after the bloody coordinated attacks on December 24 and 25.