Repentant Boko Haram Arabic teacher, Ibrahim Suleiman has explained why he joined the Islamic sect. Suleiman, who tagged the group’s practices in Sambisa, Borno State, as barbaric and un-Islamic, said he became a member to enable him rescue his three children who were forcefully taken by the group. 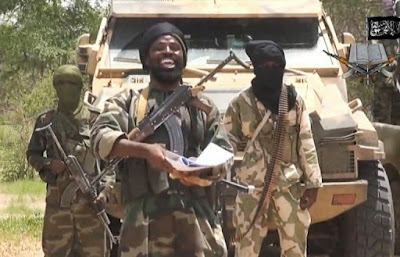 The ex-sect member made this confession on Wednesday when he gave up his membership of the terrorist group, in Maiduguri, the Borno State capital. He told newsmen that he willingly surrendered to the military after escaping from Sambisa forest along with his three children. Narrating his experiences, the Arabic teacher said he was forced to join the group following an unsuccessful mission to rescue his children aged between four and 10, who had been enlisted by his elder brother. He said, “My brother was a member of Boko Haram and has been with the group for a very long time. “When they were dislodged by the Nigerian Army in Maiduguri, he ran down to me in Kano and stayed with me for about one year. As at then, I never knew what he was up to. “I was teaching Arabic students in Kano and, at the same time, doing small-scale business. “Unfortunately, my business crumbled and I had no money to continue keeping my brother and his wife; so, he moved from Kano to Gashuwa in Yobe State.’’ Suleiman revealed that life became very tough and unbearable after he and his wife divorced, so he had to join his brother in Gashuwa. According to him, his brother suddenly disappeared with his three children. “I never knew what he was up to; until I realised that he had taken my three kids along with him to Sambisa. “It took me 10 months to hear from him and then he confirmed to me that he and my kids were in Sambisa. “When I asked why he took the kids with him without my knowledge, he replied, to my greatest shock, that they were doing God’s work in Sambisa.’’ Suleiman said he was compelled to join the group after all pleas to his brother to return his children failed. “So, I called him and told him I was ready to join the fight for God. He was happy and asked me to come to Maiduguri and wait for his directions. “He sent someone to pick me up and then he took me to a place along Damboa Road, where we waited for a whole day. “On that day, my brother and his co-Boko Haram insurgents went for a mission at Buni Yadi in Yobe. After they came back from the mission, they took me to Sambisa. “We went through about 30 Boko Haram camps at the forest before getting to our own camp. I finally saw my kids with other kids at the camp called ‘Kandahar.’ They asked me what I could do and I said I wanted to be an Arabic teacher. It was at that point I discovered that going out of the camp was impossible. So, I was forced to zero my mind and join them. “After the quarrel between Shekau and Mamman Nur, I picked the kids and parted with Mamman Nur to a separate camp. “Shekau’s barbaric treatment of women, children and old people was what made us to part ways with him.’’ Suleiman said he managed to escape with his three children when the army attacked the camp at Lake Chad border, while his brother and many other sect members were killed. “I have never held a gun or killed anyone, but, I have seen many Boko Haram kill people. “That was one thing that made me to run away, because all Boko Haram practises were barbaric, un-Islamic, inhuman and satanic. They take drugs, rape women and kill innocent people who don’t believe in them.

“They steal from the poor and starve their own members. So, everything they stand for is un-Islamic.”

Corpse Of Young Lady Discovered After Being Carried Away By Heavy Flood In Imo. Photos

Player Brutally Attacks Referee For 'Sending Off His Teammate' In Spain. Photos