Ayodele Fayose, governor of Ekiti state, has alleged that some people close to President Muhammadu Buhari buried loot in the presidential villa in Abuja. Fayose made the claim in response to the statement of Lai Mohammed, minister of information and culture, that looters have resorted to burying stolen funds in their backyards, deep forests and burial grounds. 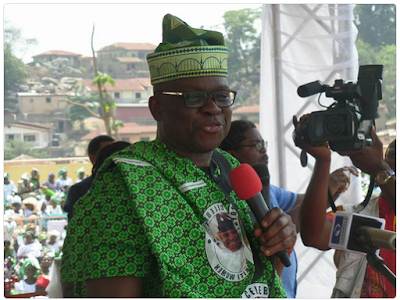 Mohammed said this while saying whistleblowing policy of the federal government had been yielding results. But in a statement issued on his behalf by Lere Olayinka, his spokesman, Fayose said Mohammed was only trying to play on the intelligence of Nigerians. “Looters in the Muhammadu Buhari’s presidency, especially those being compensated for funding the election of the president in 2015 bury their own loot in the villa with presidential protection,” he said in a statement. “Should it be wrong for other supposed looters that do not have presidential protection like the All Progressives Congress (APC) looters to bury their loots in burial grounds probably for spiritual protection? “Nigerians can no longer be fooled with stage-managed loots recoveries, with no traceable owners (looters), especially when the loots are traceable to close associates of the president and his cabinet members. “Obviously, this so-called anti-corruption war has become a laughing stock with N49 million found in Kaduna Airport, N448 million discovered in a shop at Victoria Island, Lagos and N13 billion found in Ikoyi, Lagos neither having owners nor the identities of owners of the property where the money was found known.” Fayose claimed that it is either the recovered monies belong to those around Buhari or the government planted them “to sustain its fake anti-corruption fight”. “It is either the money belongs to members of Buhari’s government or it is being planted by the government to sustain its fake anti-corruption fight in the minds of the people,” he said. “Enough of stage-managed and fake anti-corruption war aimed solely at opposition figures, especially presidential hopefuls in the 2019 election.” The governor alleged that two different laws were now being operated in the country, saying one is for the APC and those who decamp to the party and the other for the opposition, especially those perceived as having presidential ambition. “The narrative they push daily is that only those in their government are saint while other Nigerians, including those in the national assembly, judiciary, opposition politicians and the civil servants are rogues while only Buhari’s appointees are saints,” he said. “To worsen matters, the cluelessness of the APC government in the last two years has plunged the country into debt without anything to show. “The cabals in the presidency are also taking advantage of the president’s state of health, which is as a result of his age to oppress Nigerians. “Nigerians must therefore keep their eyes on the ball and not be carried away by the orchestrated distractions aimed at preventing them from seeing how the APC led government has failed woefully.”

He called on the international community to hold Nigeria accountable on the recovered N13 billion cash found in that Ikoyi, Lagos apartment saying; “this must not be swept under the carpet.”

See What A Danfo Driver Was Spotted Doing In The Presence Of Passengers..