Fadimatu Umar, daughter of the district head of Umar Ardo in Yola, Adamawa State, has claimed that her father bribed the Police Commissioner in charge of Force Criminal Investigations Department (FCID) in Abuja to cover up a case of an attempt to kill her. She alleged that her father planned to use her corpse for a ritual. Ms. Umar claimed that her siblings – Murtala, Aisha, Abubakar and Aliyu – were hired by her father to carry out the murder. . 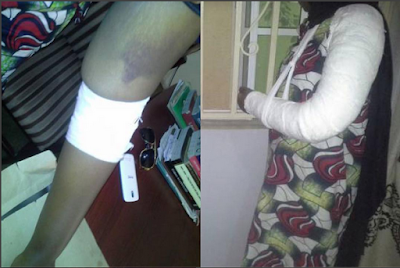 Her siblings, she told SaharaReporters, attacked her, leaving her with a badly damaged arm, which may have to be amputated. The victim, 28, disclosed that less than a year ago, her stepmother, Bintu, died under mysterious circumstances, which she alleged was the handiwork of her father. The woman’s death, Ms. Umar added, convinced her that she would be the next target. . After hearing noises coming from the front gate of her home, Ms. Umar jumped through her window in fear of her life. She alleged that she was pursued by her siblings until they caught up with her in front of the National Identity Card Management Office. . Ms. Umar said she reported the attack to the police, who subsequently arrested Aisha and Abubakar. But Aliyu Umar Ardo, an Air Force officer, and Muitala, who works with Intels Services, escaped arrest by fleeing. . Aliyu, she said, later emerged and wanted to shoot her, a fate she escaped through the intervention of family friends. She maintained that Aliyu and Murtala have continued with their plot to kill her in an effort to end the case of attempted ritual killing she reported to the police. Ms. Umar then fled Yola and petitioned the FCID in Abuja. The petition led to the arrest of Murtala. Their father used his connections to free Murtala, who proceeded to bribe Mr. Jonah Mava, Police Commissioner in charge of the FCID, to dump the case. .

She also disclosed that her case with the family would be brought to court in Adamawa State on April 6, but she has been warned not to appear in court because she would be abducted.

This 27-Year-Old Woman Is The First Woman To Visit Every Country In The World. Photos