Doctors had to cut a metal ring off a pensioner’s penis with an angle grinder – and were forced to call the fire brigade to borrow their equipment. The patient, a man in his 60s who lives in the city of Hanzhong, in north-western China’s Shaanxi Province, suffered such intense swelling on his member that medics in the city’s People’s Hospital had no choice but to ask the fire service for help. 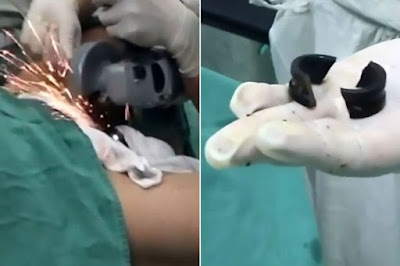 The pensioner’s awkward situation was first discovered by his family members, who were the first to spend hours trying to free him – in vain. In the end, they took him to hospital and explained his choice of pleasure device by claiming he was suffering from a “minor mental disorder.”

Rescue footage from the operating theatre shows the patient lying on a chair with his legs spread while a surgeon uses an angle grinder to saw off the ring, which is said to have been too thick to cut with pliers. The risky procedure – a “last resort” – caused massive amounts of sparks to fly inside the room, but the man’s penis was finally freed from the ring after about 30 minutes of slow and patient cutting. The man is now recovering in Hanzhong People’s Hospital and has yet to be discharged.

See How A Boy And Girl Were Seen Dancing At A Children's Party…..Photos/Video

See What Bayern Munich Coach Did To Prevent Ribery From 'Exploding' After He Was Substituted. Photos.