Goke Olatunji, a former aide of Ayodele Fayose, governor of Ekiti state, has been arraigned before a high court in Ekiti over alleged murder. Olatunji is charged alongside Thaddeus Aina, a house of representatives member representing Ekiti north federal constituency II. 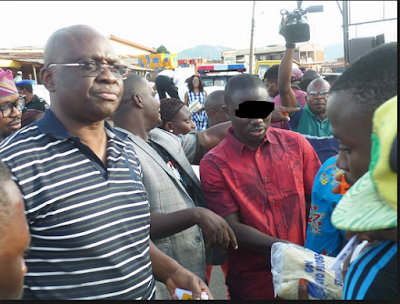 The duo are accused of the deaths of Tunde Omojola, a Holland-based Nigerian, and Ayodeji Daramola, a World Bank consultant. According to NAN, when the case was called up, it was stalled due to absence of Aina. Adekunle Adetowubo, prosecuting counsel, said he had been informed that Aina, had been flown abroad for medical treatment over an undisclosed ailment. “My lord, the counsel to the 2nd respondent had told me that he was sick. The purpose of this case is to prosecute and not to persecute. Again, only the living can be tried and not the dead,” he said. “We pray that he recovers soon and by the time he will appear, the trial can be heard expeditiously. We can’t continue with this case until the 2nd defendant appears in court, because this is a criminal case “Ordinarily, we would have requested for a Bench Warrant to bring him to court, but we have done our own findings and we found out that he was truly flown abroad for treatment. “My lord, this adjournment does not mean we are withdrawing the charges against him, we are not even ready for that. “Some of those granted bail in this case could not be found now, but the 2nd respondent has consistently been coming to court. So, we want him granted this opportunity to appear when his health is restored. “What we intended to do today is to mention the case, but under this circumstance, we oblige your lordship to give us a new date so that we can come with our witnesses “We know that this case has a chequered history but we still need patience since the defendant was only exercising his fundamental rights.” On his part, Adewale Fowe, the judge, adjourned the matter to April 27. Omojola was killed in Ifaki Ekiti in 2006 during a councillorship election, while Daramola was murdered in Ijan Ekiti on August 14, 2006.

Both murders were committed under the first term Fayose.