Unconfirmed reports making the rounds online have it that Super Eagles and Leicester City forward Ahmed Musa has tied the knot with his new heartthrob Juliet Ejue. The 24-year-old who recently divorced his wife Jamila, a mother of two children, has now settled with his new bae Juliet. Reports say the love birds have been dating for over two years now. 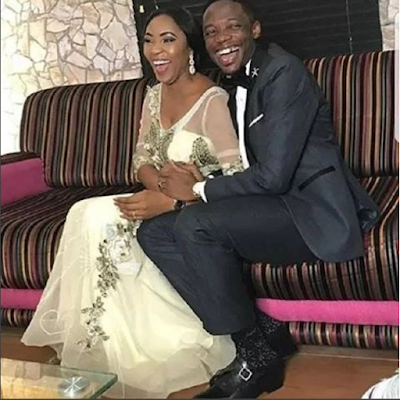 Although the couple are yet to officially make it public, from the latest picture posted by Musa’s teammate in the national team and friend Juwon Oshinawa, it appears the duo have ‘sealed’ their marriage. . The lovebirds were pictured in their wedding dress laughing away.

Oshaniwa posted on his instagram page with the caption: “This laughter never depart from ur home my guy…..HML???????????????? @ahmedmusa718.” It was also stated that Musa got Juliet a place in the affluent area of Lekki in Lagos and bought her a Mercedes Benz C300.

New wife Juliet is based in Lagos and she is from Calabar. It is also reported that the football star had paid off his former wife Jamila by giving her one of his houses in Kano as well as a recent model Honda car. Musa and Jamila lived on the same street in Kano before they started courting.

Although the player has continued to receive heavy criticisms over the decision, Musa responded when he queried why they are judging him. “Who are you to judge the life I live? I’m not perfect and I don’t have to be! Before you start pointing fingers, make sure your hands are clean #JULMUS,” he wrote recently on his IG page—

See What Doctors Removed From The Stomach Of A Girl Who Loves Eating Hair. Graphic