A woman, Helen Otike, has approached an Igando Customary Court, Lagos State, seeking an end to her 18-year-old marriage to her husband, Godwin. The 50-year-old businesswoman who initiated the divorce proceedings told the court that her husband refused to make love to her. 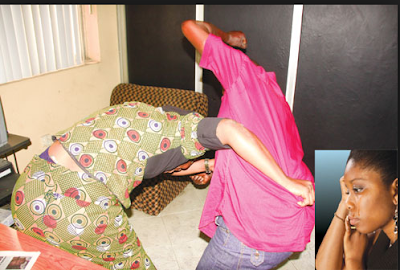 She further accused her husband of having other children outside their marriage while preventing her from having children.

“My husband built a duplex in Lagos, abandoned me there and left for Abuja. He always refuses to sleep with me wenever he is around. “He will enter his room and lock the door. I will knock several times, but he will refuse to open the door. He will leave again after some days.

“It is unfortunate, I have wasted my years with him without a child, I am 50 years old now, where do I start from.” The petitioner also accused her husband of stealing her N500,000.

She said, “When I flew my brother to India for kidney transplant, I kept N500, 000 in my wardrobe . “But when I came back, my husband had stolen the money and he is yet to make a refund. “She begged the court to dissolve the marriage.

Godwin Otike, denied stealing his wife’s N500, 000, claiming that he used the money for prayers.

“When my wife took her brother abroad for kidney transplant. I took her money and used part to settle the pastors that were praying for the success of the transplant. “I used the other part of the money for transportation to churches for prayers.”

The 68-year-old training consultant said that he was told by his mother that his mother-in-law was behind his predicament.

“My mother told me before she died that my wife’s mother had hand in my downfall. “She told me not to allow my wife to attend her burial when she died which I did,’’ he said.

The respondent conceded to the dissolution of the marriage that he too was also fed up with the union.

The court president, MrAdegboyegaOmilola, adjourned the case till May 30 for judgment.

Teenagers In Russia Are Committing Suicide In A 'Social Media Game'. Photos