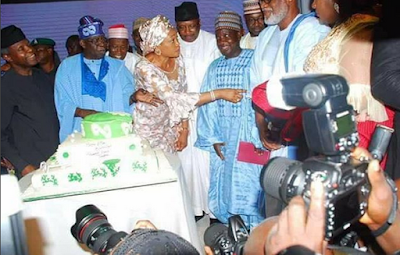 The wife of the APC Leader, Oluremi Tinubu, could not hide her disgust for the Ondo Governor as she ordered the latter out of the front roll of dignitaries billed to take photograph with her husband. Several eyewitnesses at the event informed Sahara Reporters that Mrs Oluremi Tinubu, herself a serving Senator upon sighting Mr. Akeredolu at the front roll spontaneously snapped violently against the Ondo Governor and ordered him out of the front roll. Sources said that it took the intervention of the celebrant, Tinubu, and the Oba of Lagos, Rilwan Akinolu before Mrs. Tinubu could be pacified. But inspite of the intervention, the Ondo Governor was nevertheless implored to move a bit to the back to ‘completely douse tension.’ _ Others at the front included the Vice-President, Prof. Yemi Osinbajo, the Lagos State Governor, Akinwumi Ambode, the representative of President Buhari and Minister of Interiors, Abdulrahman Dambasau. Mrs. Tinubu is reputed to be hostile and rude to friends and associates of her husband she does not agree with. She has also at several occasions physically assaulted fellow legislators, the latest being Senator Dino Melaye and the Senate President, Dr. Bukola Saraki.

Incredible! See The Amazing Bridge Set To Be Built Ahead Of 2022 Beijing Olympics..Photos

Photos Of Enyimba Player During His Successful Medicals At Barcelona