A man identified as Okeme Arome Romey has narrated how he escaped death after being confronted by armed robbers on his way to Abuja from Kaduna state. Read what he shared below; 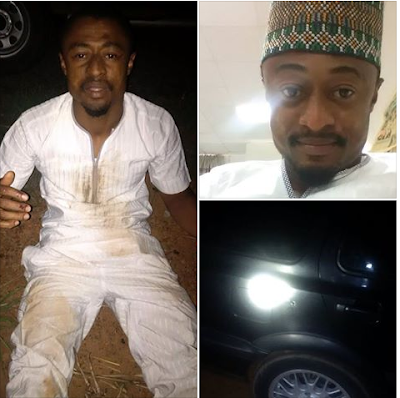 On the seventeenth of May in the year of our Lord two thousand and seventeen, at about 6.20pm, I cheated death…yet again. I had just spoken with Arc. Felix and hung up with a wry smile that didn’t go just too soon. It’s being a while I saw the young man. I was headed to Abuja from Kaduna in a public car, there was a gentleman who sat next to my left engrossed in his phone and I peeped and he let me in on what he was watching. I smiled because I had seen the funny video before. I focused on the journey proper as we drove some 20-30min after taking off, I realized we were at a village called Rijanna and I let my fibers and muscles relax as we had some 1-2hrs more of driving to do. Just as I made to relax, I caught a glimpse of a car parked in the distance by the side of the road with some rough looking men, about 5, wearing military camouflage tops and other trousers wielding guns, I recognized a locally made pistol and some bigger AK47 rifles.  They were obviously the Highwaymen. This mental calculations took only a few seconds to register and I whispered aloud, Robbers! They were robbing the occupants of the vehicle as I saw them all seated on the ground distraught. We had unfortunately ran into them, one of them started beckoning at us to come closer, we were some 50-100meters away, so i asked the driver to reverse the car and try to escape. He obliged. As the car screeched to retreat, one of the robbers launched after us, he pointed his gun at the vehicle and squeezed the trigger, there were rain of bullets digging their way through the thick body of the car with ease, wheel screen shattered and glasses splintered hither and thither. I was under the illusion that we had escaped when out of the blues three other colleagues of theirs emerged from the bush behind us in a commando style with AK 47s and opened fire on the car, I was sitting just directly where the car was taking fire. The driver opened his door and jumped out, the passenger at the extreme left of me behind the driver opened his door also and we began pouring out. Once outside, we made for the trough on the side of the road in an attempt to escape to the other carriage of the road leading cars from Abuja to Kaduna. The robbers didn’t give up just yet, they ran after us and kept shooting, bullets bounced off the ground close to my feet and flew past my side, I missed a step and fell, picked myself up and commenced running again. It was obvious my mind ran faster than my legs. I kept the motivation going by saying to me, ” breathe easy and run for it, you haven’t been hit”. To the glory of God alone, I made it to the other side of the road and kept running while flagging cars down. I was finally lucky to get one which stopped, whisked me away to some 2-3 km from the site of the action where I met the police preparing to respond. They had obviously heard the shots and noticed the long queue building up on the highway. As I was running I could see from the corner of my eyes how cars were trying hard to turn around, some left their cars in the middle of the road and jumped out, passengers were pouring out through windows and skedaddling, people were falling off as others took cover in the bushes. It was a chaotic sight. CONTINUE BELOW 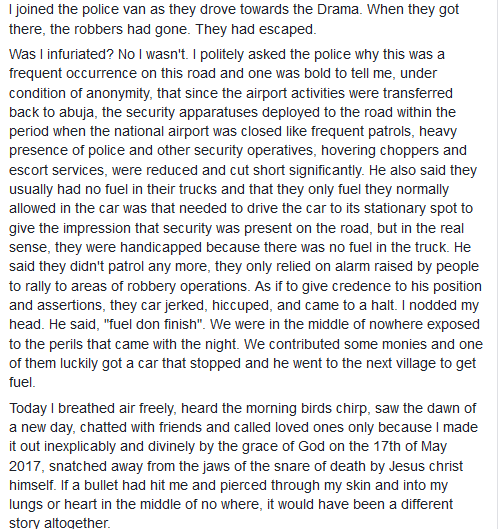 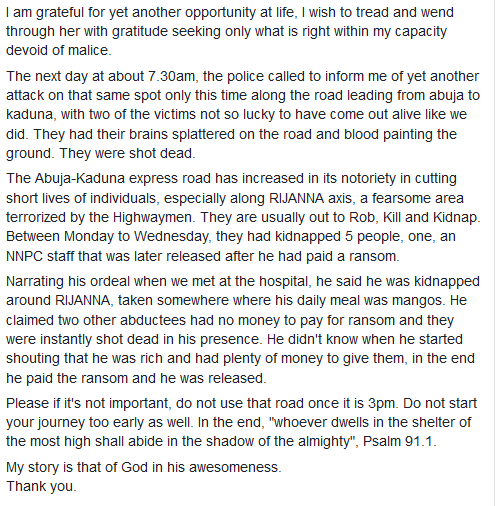 Shame! Pranksters Spark Outrage After Doing This To A Statue Of Joseph And Mary.