It was reported HERE yesterday about the woman who was arrested for allegedly selling human meat at Adabraka Marke, Accra, Ghana. Now the woman who is in police custody has claimed that she was directed to engage in the trade by her ‘spiritual pastor’. 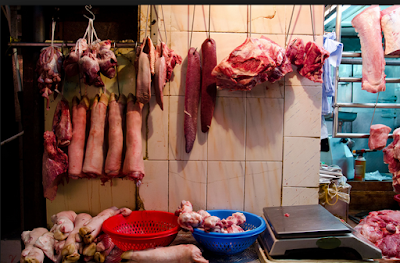 Greater Accra regional Police Commander, ASP Afia Tenge said on Adom FM’s Morning Show, ‘Dwaso Nsem’ Thursday that the 60-year-old woman -Florence Appiah said she was instructed to sell meat to make a living by her ‘spiritual Pastor’. “She said she bought her meat at Makola and was coming to sell at Adabraka market but she was new in the market…she said selling the meat was a direction from her Spiritual Pastor and that it was a cow meat she had bought from Makola to come and sell at the market…,” she said. The Adabraka Police in Accra on Wednesday arrested a woman believed to be in her 50s for allegedly selling human meat. The woman, according to the market women, was carrying a tray with some pieces of meat, and was moving strangely in the market. The Police PRO continued that the Adabraka police had to move in swiftly to prevent the mob from lynching her on the suspicion of selling human meat. The police, she said took the woman and the meat to their station but could not immediately tell the kind of meat she was selling from just a look at it. “We only know its grilled meat but it is difficult for the police to determine whether it is human meat or otherwise, so we forwarded the said meat to national CID for forensic testing to show if it is human meat or not…,” she said.

She called on the public to remain calm as the forensic report is still yet to come out.

Italian Doctor Set To Adopt Nigerian Girl After Her Parents Died In A Migrant Boat. Photos

Teachers Who Raped Their 6-Yr-Old Student, Paraded Alongside Arrested Kidnappers In Bauchi. Photos