More than 150 Nigerians, some of them in tears, broke out in song as they touched down on home soil, after months stuck in Libya waiting to try to get to Europe. “I don’t leave Nigeria again-o! I will never forget my home!” they sang. 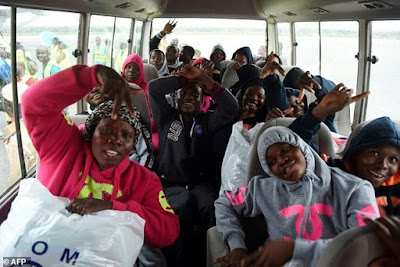 The rain fell heavily on the runway at Lagos international airport and night was drawing in but the atmosphere on the small bus taking the new arrivals to immigration control was almost hysterical. They broke out in loud applause, waving at onlookers curious to see who had emerged from the chartered jet that had flown in from the Libyan capital. “I’m so happy, it’s like winning the lottery,” said Osapolor Osahor. The 24-year-old tailor said life was hellish in Tripoli: the sound of gunfire was everywhere and there was a mounting toll of deaths, particularly of black Africans. “Some are in prison for so long, six months, seven months… I was put in a cell, like four, five months before I came back,” he told AFP. 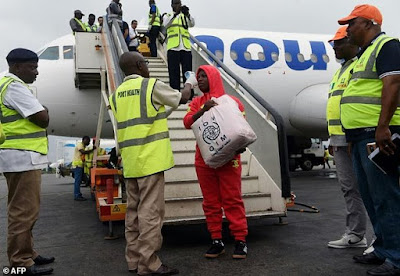 Meet The Proud 52-Year-Old Sugar Mummy Who Has Dated Over 250 Men. See Photos

N8Billion Currency Scam: FG Seizes Properties Of Bankers As They Are Jailed For 18 Years. Photos

Governor Wike All Smiles As He Sails A Land Ship In Rivers State. Photos