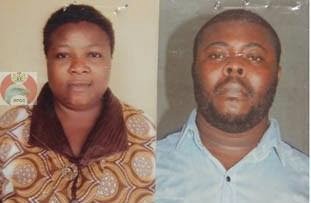 The Economic and Financial Crimes Commission, EFCC, released a public statement to that effect…Read below

The Economic and Financial Crimes Commission, EFCC, on February 19, 2015 arraigned the duo of Onyeneho Ugonna and Elizabeth Nwagboso, before Justice Lambo Akanbi of the Federal High Court, Port Harcourt, Rivers State, on a 7-count charge bordering on conspiracy, forgery and obtaining money by false pretence.

Count one of the charge reads: “That you Onyeneho Ugonna and Nwagboso Elizabeth, on or about the 25th day of March, 2014 at Port Harcourt, within the Jurisdiction of this Honourable Court did conspire among yourself to commit felony to with, obtaining money by false pretence and thereby committed an offence contrary to Section 8(a) of the Advance Fee Fraud and Other Fraud Related Offences Act, 2006 and punishable under Section 1(3) of the same Act..”

Another count read: “That you Onyeneho Ugonna and Nwagboso Elizabeth on or about the 15th day of April, 2014 at Por…

North Korean Dictator To Launch Missile On Day Of US Presidential Elections. See Why

See What A Topless Female Activist Did To Donald Trump's Waxwork. Photos