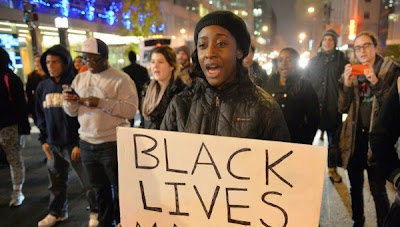 American protesters have gathered outside the Baltimore police headquarters as anger grows over the police killing of yet another black man. Freddie Gray, 25, died on Sunday at a hospital one week after he was seriously injured while being arrested by the Baltimore Police Department. Family lawyer William Murphy said Gray fell into a coma after his spine was broken while he was in custody.
Six police officers have been suspended and officials said Monday that they were changing police procedures as they investigated the death of Freddie Gray. The officers involved were suspended with pay pending the outcome of the investigation.The death of Mr. Gray came amid growing national outrage over police treatment of black men.

Couple Spotted Riding A Horse Totally N*ked On The Streets Of Colombia. Photos