The Kano Police on Friday brought a 20-year-old Painter, Ali Wada of Gulu village in the Rimin Gado local government area of the state, before a Magistrates’ Court in Kano for allegedly defiling a 10-year-old girl after luring her to under mango tree. The defendant is standing trial on a one-count charge of rape. 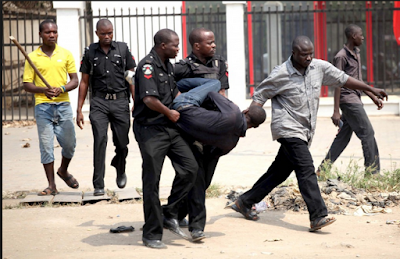 The police Prosecuting Officer, Mr Rufa’i Inusa, told the court that Umar Idris of the same village reported the case to the Rimin Gado Police Division in Kano, on March 16. According to Inusa, the defendant had on that faithful day at about 7.30 p.m. deceived and lured the complainant’s 10-year-old daughter. “Wada lured the 10-year-old girl into a farm land situated in Gulu Village, under a Mango tree. “The defendant removed the victims pant and forcefully had unlawful sexual intercourse with her,’’ he said. The prosecuting officer, however, said the offence contravened Section 283 of the Penal Code of the state. The defendant pleaded not guilty to the charge. The defendant had filed an oral application for his bail, which was vehemently objected to by the prosecuting officer. According to Inusa, the offence is a grievous one.

He, therefore, prayed the court to place Wada on remand, pending the determination of the case. In his ruling, Chief Magistrate Muhammad Jibril, ordered the remand of the accused in prison custody. Jibril, thereafter, adjourned the case until April 10, for mention.

Meet The Scammer Who Stole Saudi Prince's Rolls-Royce And Sold It To A Car Dealer. Photos

Female Professor Strips Unclad After Being Locked Out Of Her Office. See Photos