Some soldiers invaded the office of the Joint Admissions and Matriculation Board (JAMB) in Maiduguri, Borno state capital, on Friday, to assist some young ladies register for the Unified Tertiary Matriculation Examination (UTME). The officers who were unruly threatened to beat up anyone who did not follow their orders. 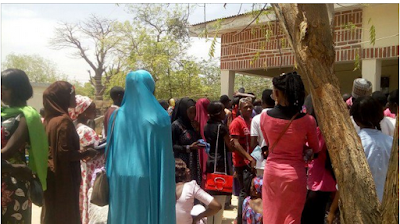 Since the commencement of registration last week, hundreds of applicants have been trooping to the JAMB office, located opposite a Zenith Bank branch in the state capital, on a daily basis. Officials of the examination body had been attending to the candidates on a first-come-first-serve basis, until Friday’s invasion. Some of the affected candidates, who are residents of the ancient city, confirmed that some of the officers were having affairs with the candidates who brought them there. The soldiers were said to have harassed those who had been standing in queue for hours, because they failed to give way to their girlfriends to complete their registration. They also threatened to beat up the JAMB officials who did not cooperate with them. Zarah Musa, a frustrated applicant, narrated her experience to TheCable. “We were all in the queue when these soldiers arrived with many girls. They insisted that we give way for their girlfriends to complete their registration,” she said. “Initially we resisted but we had no choice than to comply when they threatened to beat us up, including the JAMB officials, who had been conducting the registration orderly. “Now, we are left under the scorching sun, while the soldiers are inside facilitating registration for their lovers.” Jummai Amidu, another applicant, corroborated Musa’s claim. She said the whole process had turned into “soldiers’ affair”, wondering the fate of those who do not have soldiers as boyfriends. When TheCable contacted JAMB officials to hear their own side of the story, they declined to speak, saying they were not authorised to comment on the issue. Calls put to Sani Usman, spokesman of the army, did not connect, as his telephone line was out of reach. A top military source said Usman was at the closing ceremony of the Small Arms Competition in Sambisa forest.

“My Wife Is Promiscuous, She's Having An Affair With Our Pastor” Man Tells Court

Photos Of Nigerian Navy Commandos Training Hard In The Desert.