Report has it that there is a serious rift between Leicester City forward Ahmed Musa and Super Eagles coach Gernot Rohr because of the player’s attitude. 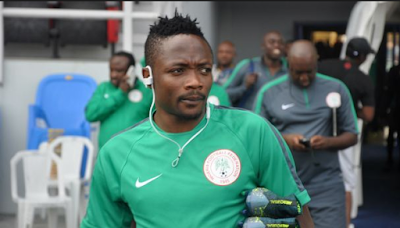 “He seemed to have some problems with the team when Samson Siasia was briefly in charge, but he made the mistake of carrying this into Rohr’s regime. That has not helped him,” an official told  SCORENigeria…. “His general attitude in camp has not been good.” Rohr overlooked Ahmed Musa to lead the Eagles against Senegal in London last week when he handed Ogenyi Onazi the captain’s armband instead. It was further learnt that immediately after this decision, the Leicester City star hurriedly called a players’ meeting during which he announced he will no longer be assistant captain of the team. “That was very childish of him,” blasted a team official. Rohr revealed on radio that Ahmed Musa was excused from camp to attend to family issues, but SCORENigeria has since gathered the player asked to leave camp, and he did that at the crack of morning. But this was only the culmination of the problems between player and coach as Rohr has been far from pleased with Ahmed Musa’s general attitude particularly on the pitch. It would be recalled that Ahmed Musa drove into the team’s training camp with an expensive Range Rover Sports he had acquired just days to a crucial World Cup qualifier in Zambia in October. The coach was miffed by this as he expected all the players in camp to focus totally on the game in Ndola, Zambia. “The coach did not even mind this. It’s the player’s attitude he has not been happy with,” further informed another official. “He did not pull his weight even in training.”

President Buhari Receives Letters Of Credence From New Ambassadors At The Villa. Photos